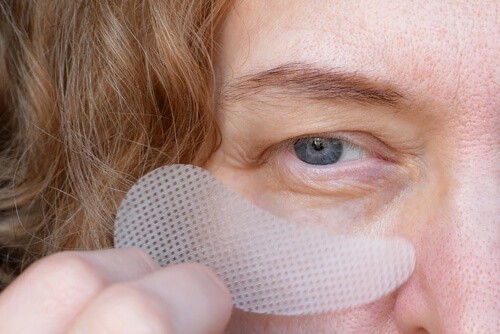 What Are Droopy Eyelids?

A droopy eyelid is characterized by the sagging of the upper eyelid - it droops downwards.

It is also called ptosis, a fancy word for “drooping.”

The edge of the upper eyelid is either lower than it should be or has excess baggy skin.

Sometimes, both these factors contribute to a droopy eyelid.

A multitude of factors contributes to a droopy eyelid.

According to a study, sagging eyelids can run in families, and at least one gene seems to play a role in causing eyelids to sag.

The same study also mentions that inherited factors account for 61 percent of the risk of sagging eyelids.

The H2AFY2 Gene and Droopy Eyelids

The H2AFY2 gene contains instructions for the production of core histone macro-H2A.2.

This protein regulates gene expression or how much product a gene produces.

The H2AFY2 gene is expressed in the skin and has been implicated in the systemic lupus erythematosus (an autoimmune skin condition) pathway.

Several studies have already established the role of histones in aging and cell senescence (cell death), which could explain the role of the H2AFY2 gene in eyelid sagging.

These SNPs are located in intronic parts of the H2AFY2 gene and very close to another gene called AIFM2 that induces apoptosis or programmed cell death.

Doctors mostly do not start treatment for children with congenital ptosis right away.

They check their eyes periodically.

If there’s an indication of amblyopia, the doctors treat it with drops, patches, or glasses.

For adults, the most common treatment option for droopy eyes is surgery.

The surgery involves removing the extra skin and tucking the muscle that lifts the lid.

Another option would be reattaching and strengthening that muscle.

While these procedures are safe in most cases, there could also be some possible complications.

There are chances of surgery not being successful.

Sometimes, the procedure could also overcorrect the problem by leaving the eyelid either too high or too low, requiring further surgery.

Another management option is the ptosis crutch, also called the eye crutch.

It lifts your eyelids so you can see better.

Hydration: Dehydration contributes to saggy eyelids. Therefore, it is important to consume 8-10 glasses of water every day.

Cold compress for the eyes: Placing cucumbers or tea bags can help with the appearance of ptosis by alleviating swollen or puffy eyelids. But they don’t treat ptosis itself.

Supplements: Lutein and B12 supplements may help reduce ptosis. However, there’s no concrete scientific evidence proving the same.

Please note that it is important to consult your medical practitioner before starting any supplements.

Eye serum: Eye serums are packed with nutrients, including vitamin C. They help rejuvenate and tighten the eyelids.

Eye exercises: While these exercises may not get rid of ptosis completely, they can help reduce the amount of eyelid droop briefly.

Image: Stimulation of a droopy eyelid with an electric toothbrush

Eyelid resistance training: Blinking while raising your eyebrows and holding them in that position can create resistance for your eyes. This may help strengthen your eyelids.

Gazing: Staring at a particular object with your affected eye/s as long as possible can help reduce ptosis.

Congenital ptosis is not preventable.

Acquired ptosis in some cases (like age, eye trauma, muscle and nerve damage) may not be preventable as well.

Some factors you can change are refraining from alcohol and smoking and maintaining a healthy BMI.

Using spectacles instead of contact lenses and not rubbing your eyes often can also help avoid ptosis.

A Sneak-peek Into The Gene Skin Report