Vitamin A plays a very important role in the overall development and maintenance of the body. This fat-soluble vitamin is stored in the liver and is available externally in two forms

Vitamin A is known to support a variety of metabolic functions. It helps with better vision and improves your immunity. Getting the right dose of vitamin A also plays a role in keeping the skin and teeth healthy. The right amounts of vitamin A protect the skeletal system and the soft tissues in the body.

In pregnant women, right vitamin A levels help with tissue repair after delivery and also keeps the risks of infections low.

It took almost 130 years for researchers to identify the existence of vitamin A and understand its effects on the human body.

Early accounts of Vitamin A Deficiency (VAD) have only been recorded in terms of night blindness amongst children, soldiers, and sailors. Back then, the only solution offered was to consume cod liver oil or eat an excess of cooked liver. Doctors knew this worked, but didn’t understand why it worked.

There were innumerable studies that tried to understand the effects of nutritional deprivation on animals and human beings between the mid-1800s and 1900s.

In 1912, Sir Frederick Gowland Hopkins concluded in his clinical trial that an additional factor in milk apart from carbohydrates, fats, and proteins helped rats survive on only a dairy-based food plan. He won the Nobel Prize for this study later.

This additional factor was narrowed-down to be a fat-soluble nutrient in 1918 and was finally identified as vitamin A in 1920.

In 1931, the International Conference on Vitamin Standards was first held in London and the league set to make standards and recommended values for all identified vitamins, including vitamin A.

Though people all over the world have become conscious about their nutritional intake, WHO states that about 250 million preschool children are still diagnosed with VAD. Making the right change in food habits, identifying the effects of one’s genes in his/her vitamin A requirements and taking vitamin A supplements, if needed, will all help bring down the risk of VAD.

We humans cannot produce vitamin A in our body, hence it is called an essential vitamin. We need to obtain it through diet or supplements. Vitamin A can be derived from both plant and animal sources.

The genetics of some individuals predispose them to less efficient conversion of biologically inactive carotene to active retinol. They are usually advised to consume animal sources of vitamin A or take vitamin A supplements or consume higher amounts of plant sources to compensate for lowered conversion efficiency.

We will look into more details of specific genes that influence this predisposition in the following sections.

Everyone knows carrots are a good source of vitamin A and that they can improve general eyesight.

Did you know where this idea stemmed from?

During World War II, the British government ordered citywide blackouts to prevent German bomber flights from identifying their targets. On the other side, the British defenses were safeguarding a secret Intercept Radar System that helped their British flyers see better despite blackouts. To keep this information a secret, the British Ministry let out official information stating their flyers were able to see better in the dark because of excess consumption of carrots!

This detail has taken deep roots and is believed to date.

Recommended Daily Intake Of Vitamin A

According to the U.S Department of Health & Human Services, here are the recommended values of vitamin A at every stage in life.

What Happens When You Take Excess of Vitamin A?

When you consume more vitamin A than recommended every day, here are some of the possible side effects recorded.

What Happens When You Have Vitamin A Deficiency?

When your Daily Value Intake of vitamin A is consistently lesser than the suggested levels, you could be at a higher risk of developing the below conditions.

What Are The Non-Genetic Factors Affecting Vitamin A Levels

A key source of vitamin A to the body is the food we consume. Naturally, not including enough of vitamin A rich foods is a top non-genetic reason for Vitamin A Deficiency (VAD). Not taking enough vitamin A can be a result of an unhealthy lifestyle, lack of awareness on the importance of nutrients, or poverty/unavailability of food.

People who suffer from chronic diarrhea and respiratory infections are also prone to having lower levels of vitamin A in the body.

Avoiding animal sources of vitamin A

Though vitamin A is available in both plant and animal sources, vegans have to depend exclusively on fruits and vegetables for their vit A needs. When vegans don’t plan their diet well and don’t consciously include enough carotenoid-rich foods, they can be prone to VAD.Veganism is hence a growing cause of concern as a non-genetic influence for VAD. If you follow a vegan lifestyle, you should be working on carefully choosing your food sources to prevent nutritional deficiencies.

Infants whose mothers show signs of VAD end up not getting enough Vitamin A in breast milk and hence are at a higher risk of developing VAD related health complications.

What Are The Genetic Factors Affecting Vitamin A Levels

Mutations in both the TTR gene and the RBP4 gene can cause low levels of retinol in the body. The TTR gene produces a protein called transthyretin that transports vitamin A internally. The RBP4 gene (Retinol Binding Protein 4) produces the RBP4 transporting protein that delivers vitamin A from the liver to the tissues around.

RBP works with transthyretin in the plasma and prevents the kidneys from filtering out excess vitamin A.

Two gene variations can cause VAD.

BCMO1 gene – The BCMO1 gene helps encode enzymes that convert the carotenes from plant-based food sources into forms that can be used by the human body.

CYP26B1 gene – This gene is responsible for bringing down the active form of vitamin A called retinoic acid. The SNP rs2241057 with G variant in this gene can cause an increased breakdown of retinoic acid and hence can result in lowered vitamin A levels in the body.

Recommendations For Healthy Vitamin A Levels

Here is what you should do to maintain the right levels of vitamin A in the body. 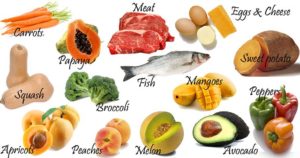